Dates of Sessions: First assessment session held on 16 th August 2016 after I had completed RMT 1&2. I then saw Robert three times a week at school to do his RMT with him each morning throughout Term 3 and 4. I met with Robert and his mother on 2 nd November 2016 to chat further with her about Robert and his RMT and to show her how to do the movements.

Child’s name has been changed to protect identity

When I met Robert he was a 5 year old Reception boy and a participant in his school’s intervention group for children with gross motor challenges. This group provides balance and gross motor activities three times a week for students identified as having gross motor challenges in a Term 1 screening assessment. Robert’s parents were written to and consented to Robert taking part in RMT.

His teacher reported he was extremely challenging and very disruptive in class. He often found himself receiving consequences for his behaviour or being excluded from the class in ‘time out’ in another classroom. He slouched at the table when writing, struggled to listen or to respond appropriately with language or behaviour and struggled with his spelling and handwriting.

His mother, reported not seeing any of this “disruptive” behaviour at home, and noted he had been an only child for around 4 years and did struggle in a group setting, “he prefers one-on- one activities.” She also mentioned that he never showed fear and this disconnect he seemed to have with emotion did worry her. She did also mention that he fell and tripped often and was easily distracted and often over-active.

Robert's mother had a very stressful IVF pregnancy, and Robert also had feeding issues after birth which meant he could not breastfeed. He had monthly ear infections and at the age of 5 was still wearing nappies at night. As a baby she said he was very, very quiet and settled and slept (and still does) on his back, dead straight without any movement. Consequently, he developed a pronounced flat spot on the back of his head which he had intervention for.

My initial session with Robert was very interesting. I sat on the floor of the room and invited Robert to join me on the floor. The verbal conversation was non-existent, Robert did not seem to hear my voice or to be able to respond. He giggled, and didn’t say any comprehensible words to me except for “poo poo” and similar toilet vernacular, for the 20minutes we had together.

I sat on the floor and observed his behaviour as he was non-responsive to my instructions or requests. He proceeded to crawl around the room and investigate (in a strikingly similar fashion to my 12month old son at the time) all the tables and chairs within it, showing a preference for tucking into small spaces. He would crawl under, over, on top of, roll on the floor, and repeat this pattern after launching himself into the room again. Every few moments he would return to me and bore his head into my stomach (again, in a manner that echoed the age-appropriate and typical disorganised behaviour of my son who would return to crawl over “mum” before setting out to explore again.) Once boring into me, he would set out again. He had constant mouth movements and even licked some of the items in the room. Eventually I was able to have him lie down to make some further observations.

By this stage, it was quite clear he would have a cluster of reflexes active and sure enough he tested positive for TLR, Spinal Galant, Landau, STNR, ATNR and Babinski. FPR and Moro were not tested however his hypersensitivity to touch, impulsivity and inappropriate language and behaviour indicated his Moro reflex was active and his inability to make and maintain eye contact indicated his FPR was also active.

Initially, I began working with the passive movements with Robert: Stimulation from Feet and Knees in lying, Stimulation from Hip in Foetal Position, Ribcage Rocking, Bottom Rolling and Windscreen Wipers.

These movements were chosen so as to get his body used to the sensation of the movements and to gently ease him into the program. Also, due to the disorganisation I had observed in his body I thought it very unlikely he would have been able to perform the active movements. The passive movements were appropriate to start with as they would work to provide the sensory input he seemed to crave from his erratic behaviour and therefore I was hopeful they would calm his system and provide a strong noticeable effect for him to recognise that something was happening in his body.

For the first three sessions, Robert still would enter the room and head under the tables. He crawled around a lot in between movements but would lie long enough to do 2-3 movements for a few seconds each. His favourite was bottom rolling and sliding on the back as long as it was done fast! He would often say to me, “as fast as you can.” By the fourth session, Robert settled immediately on the floor without any distraction or crawling around. He directed the movements and asked for particular movements. For the first time we had a meaningful conversation where he shared that he “didn’t get in trouble yesterday” and also shared about having gone 4 nights without needing a nappy at night time. His mother confirmed that within days of beginning RMT, he was dry at night and was able to stop wearing nappies.

After this fourth session, his teacher also reported that he always re-entered the classroom much calmer after his RMT sessions. She said he had a great day after the previous session and was much less disruptive.

After 3 weeks, we added in some Pre-birth leg and arm movements once a week to help ‘slow’ his system down some more and to work with his FPR. These pre-birth movements quickly became his favourites and he showed incredible concentration at performing these slowly and breathing out whilst he did them. To begin with he struggled to go slow as he wrapped his arms back in, but this improved markedly over time.

As our sessions progressed, Robert became much chattier, his toilet-talk disappeared, he would happily come along to his sessions and really did enjoy them. He was completely in charge of his sessions and became his own expert. He would roll into position for the next movement he wanted, or tell me “faster” for those he wanted faster. It felt like we really were a unit with me providing him with what his body needed as he directed non-verbally. Over time he was able to do the movements lying in a straighter line and his arms were more at ease by his sides instead of by his head

After 7 weeks, I introduced Rocking on Hands and Knees as I sensed Robert was getting a little bored with some of the movements and wanted a greater participatory role. I thought this movement would be good to work on his STNR and be a great active one he could do by himself. To begin with he struggled to get his bottom down onto his feet but this quickly improved over the coming weeks and he really loved the bouncing feel and action of it.

During this time, Robert proudly showed his class his movements and his teacher even did some with him one day when he was ‘losing control.’ He also began showing me his ‘new’ movements that he had made up himself!

After 10 weeks, I met with Robert’s mother and she sat in on a session. With mum in the room, Robert did revert to some of his early behaviour initially such as crawling around the room to begin with and taking a little while to settle down. From where he was 10 weeks ago, this behaviour I considered quite negligible, however his mother found it “confronting to see him like that…bouncing off the walls.” This was the first time she was able to observe his behaviour at school which she described as being quite different to his behaviour at home. In discussing Robert’s RMT, his mother said that he really did enjoy the movements, he showed her the movements at home, he did the movements to his little brother who was born at 31 weeks’ after 4 weeks of bed rest, and she had noticed that he no longer made seemingly involuntary noises. His mother did say she would begin doing the movements with him at home to increase the frequency of his sessions. She later reported that Robert really enjoyed them still and it was nice for Robert’s dad to be able to do something like this with him. She also commented that Robert always slept really well after doing his movements and unlike other nights were he would be calling out and getting up for drinks, toilet etc, he would be able to settle straight to sleep.

Also at this 10 week mark I chatted again with his teacher who now described him as “a completely different kid” to 10 weeks ago. We observed him sitting still on his chair, sitting upright without slouching on the table and completing his written spelling tasks with focus and attention. All things his teacher said he was unable to perform previously. His teacher and the Learning Support Coordinator, when meeting with Robert’s mother to discuss his behaviour and referrals to professionals and doctors that may be needed, did recommend that Robert absolutely continue with his RMT.

We continued with RMT until the end of Term 4 introducing Cat Arches which he mastered and he began doing some active Bottom Rolling.

Overall, apart from his behavioural changes discussed previously, his posture also changed. I could see his body gaining strength in the shoulders and a reduction in the accessory movements that occurred when he did his rhythmic movements. He began lying with his head in the midline and began doing the movements with his arms by his side.

Robert was a fascinating and lovely child to work with. The incredible change I saw in him over a relatively short period of time was amazing. I thoroughly enjoyed working with him and it was a delight to see him become more organised in body and behaviour. It astounded me how quickly he became master of his own program and how his body really did respond and seem to recognise the movements.

Rhythmic Movement Training International (RMTi) supports an individual’s ability to achieve their highest potential through the use of rhythmic, innate, developmental movements. 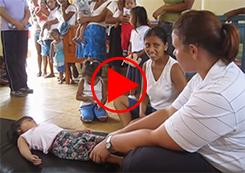